KEDARNATH- THE BELIEF IS IN THE SOUL

India is the most peaceful and spiritual country ever. There are places of the divine lord Shiva that people have a desire to visit. Among those enormous views, one of the most famous ones is – Shri KEDARNATH DHAM.

Kedarnath is a town in the state of Uttarakhand in India. It is the most remote place of the Char Dham yatra and is located in the sites of the Himalayas. It is at about 3,583m in height which is almost 11,755ft above sea level.

The snow-covered mountains, the smoky clouds, and the beautiful scenic view steal the heart of every traveler. Apart from being a pilgrimage site, Kedarnath has also become a place of trekking. Behind the Kedarnath town and temple there lies an incredible peak is known as Kedarnath mountain.

The origin of Kedarnath has not yet got a satisfactory answer. As a mythological prediction states that the Pandavas constructed the Kedarnath temple though Mahabharata does not mention any presence of Kedarnath. According to Skanda Purana (7th -8th century), Kedarnath is the place where Lord Shiva released the holy water of Ganga from his matted hairs, resulting in the foundation of the Ganga river.

Though the mystical essence has never dimmed the beauty of this beautiful temple. Adi Shankara constructed the temple in the 8th AD. Geologists say that the temple was under the snow for 400 years during the little ice age. Hence, the Kedarnath temple has stood the test of time and is more than 1000 years.

Being in the center of all snow-covered peaks, Kedarnath stands unexpectedly. In 2013 there was a major natural calamity that hit Uttarakhand. The mountainous region suffered a lot of damages due to landslides and floods yet the temple did not get any scratches. 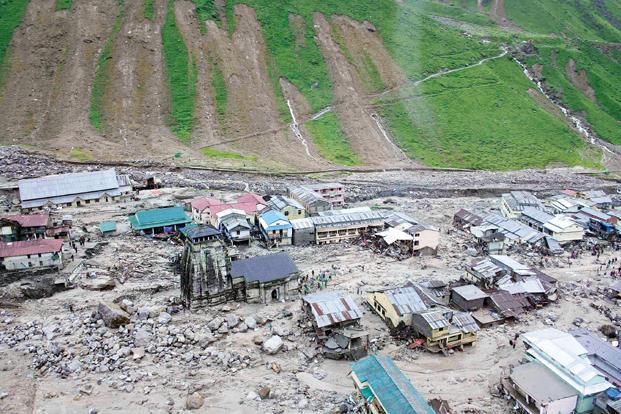 The protective stone behind the Kedarnath temple

Strangely a big rock covered with snow rolled down during the huge boulder but stopped just a few meters away from hitting the temple. It actually saved the temple from any destruction in that calamity. It was revealed that the rock had diverted a massive amount of water from the flood coming towards the shrine.

The lord Shiva devotees believe that visiting the temple ensures the blessings of Lord Shiva and also purifies their mind, heart, and soul. Apart from this, the holy evidence are enough to know that Kedarnath lies in heaven which steals the heart of every devote.

The Bhairon Baba Mandir is located to the south of Kedarnath Temple, and those who visit Kedarnath Temple are also required to visit this temple. Bhairon Nath is also known as the “Kshetrapal”, the fiery avatar of Lord Shiva that is associated with devastation and destruction. It is believed that Lord Bhairon Nath Ji, guards the Kedarnath temple. Locals say Bhairon Nath Ji drives away evil spirits and keeps the temple free from any kind of damage.

TIME FOR A GOOD VISIT

Weather conditions in Kedarnath are not very adaptable. The weather is cold for the whole year. The best time one should visit is in the summer months April, May, and June. Then the climate is cool and pleasant, thus making a good trip.

The Winter months are very cold. Due to high snow and sub-zero temperature, the temple gates remain closed from the end of November till March and opens for ‘Darshan’ on Akhsya Tritiya the Hindu festival. During that time, some priests take the idol to Ukhimath at Rudraprayag district, Uttarakhand. There the priests carry out the worship for 6 months until its return to Kedarnath.

However one should keep an eye and research carefully about the best time to visit because the Himalayan climate is highly unpredictable and constantly fluctuating.

THE BEAUTY OF KEDARNATH

The temple has a very unusual feature, it is in a triangular shape stone lingam. There is a small pillared hall in front of the temple containing images of Parvati and the five Pandava princes.  The first hall inside Kedarnath Temple contains statues of the five Pandava brothers, Krishna, Nandi, the vehicle of Shiva, and Vir Bhadra, one of the guards of Shiva. Statues of Draupadi and other deities are also installed in the main hall. Behind the temple, there is the samadhi mandir of Adi Shankara.

Furthermore, studies of inside and outside views of Kedarnath reveals its immortality from the ancient era till now. It is constructed in a manner of Hinduism culture. The temple also has garbha griha or known as an inner sanctum.   On entering the temple, you will witness a tiny golden sculpture of Nandi Maharaj.  On winter days, the view of Kedarnath is just similar to heaven.

SIGNIFICANCE OF THE TEMPLE

Kedarnath is one of the important pilgrimages among 12 jyotirlingas. This spiritual site makes one’s heart flutter. All the Shiva devotees have a special significance in this place.

All over the world, this is the place where one can find the peace needed to live in this majestic world created by god. More than the beauty of it, the belief and the spirituality which flows in the heart of every Hindu makes this temple enormously beautiful.

“ Illusions will make you flow but if

You love shiva, you will glow “

The Reason Behind Petrol And Diesel Price Hike (2021)